This post is written by Merete Sanderhoff, who works at the Statens Museum for Kunst (SMK), the National Gallery of Denmark, as researcher and project manager, leading a number of projects providing open access to the museum’s digitized collections, and using digital media to freely share knowledge and resources with fellow institutions as well as users. She is also a member of the OpenGLAM Advisory Board

In 2012, the Statens Museum fur Kunst (SMK) in Copenhagen decided to make a small batch of 160 high quality digital images of their public domain collection openly available on the web. The museum’s choice of open licenses is driven by a strong wish to encourage sharing and creative and innovative reuse of our digitized collections. Pilot projects have taught us that the need for openly licensed images and cultural heritage data is growing – not only among fellow institutions, but in the educational sector, Wikipedia, and on social media platforms in general – and likewise, that the willingness to share high quality images and data in the Danish museum community is growing. 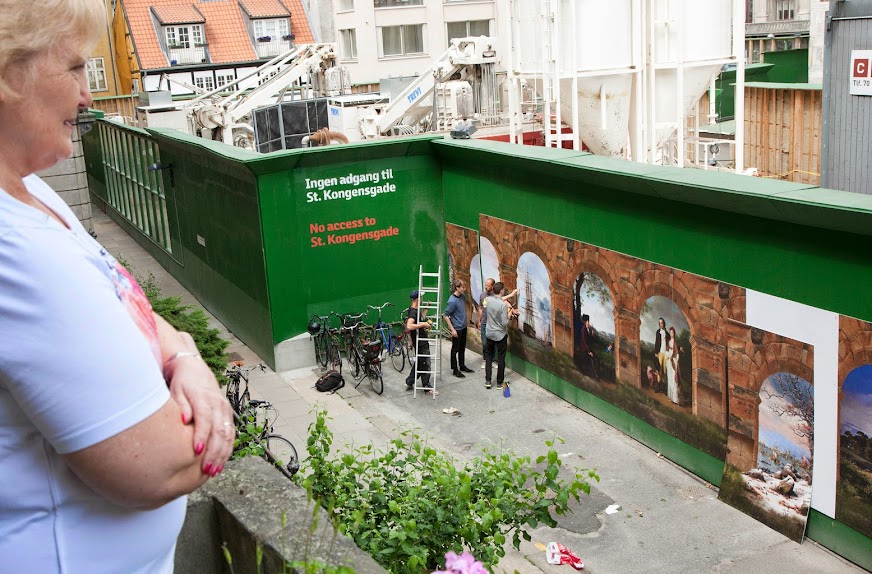 The art pilots at work. Click for more images

In order to move from good intentions to concrete action, SMK has started a couple of initiatives to encourage museums to share their digitized collections, and the public to put them into use in new interactive ways. One of our recent initiatives is HintMe – a shared mobile museum platform – described at length in this case study on the Europeana Pro blog.

Here I will talk about a more recent initiative: Remix art on the Copenhagen metro fences.

The Copenhagen Metro is being expanded, predictably causing frustration for the people living next to the construction sites. As a positive countermove, the Copenhagen Metro Company works very creatively with decorating the metro fences, often in partnership with local communities. SMK has entered such a partnership, using our charter collection of open images as the raw material.

This partnership has allowed SMK to explore several aspects of being an OpenGLAM institution (according to the OpenGLAM principles):

In our partnership with the Copenhagen Metro Company, SMK is represented by Young People’s Laboratories for Art (ULK) – a community of young “art pilots” who meet at SMK once a week to do volunteer work on creative projects. So far, they have mostly worked peer-to-peer with other young people, for instance at Roskilde Festival. As I mentioned in my talk at Open Culture in London July 2nd the Metro project has offered them a new set of challenges. Collaborating with all kinds of locals living by the metro fences – families with kids, elderly people etc. – they have run into highly diverse perceptions of art and what is permissible to do with the artworks. 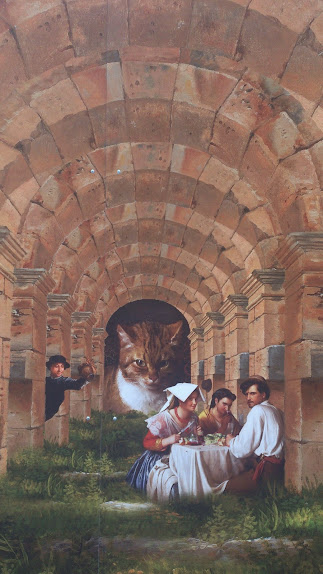 To the art pilots, so-called ‘digital natives‘, it’s a natural and deeply rooted thing to remix the digitized artworks, do mashups, collages and Photoshop manipulations, in a seemless blend of “high and low” culture. To some of the locals around the construction sites, especially those of older generations, this approach to art seemed at first almost like an assault to the original artworks. This resulted in a lot of very productive discussions and negotiations between the art pilots and the locals who participated in project meetings and workshops.

To SMK it has been interesting to discover that our own efforts to let go of control over our digitized artworks that are in the Public Domain – and therefore may be used by the public without restrictions – can offend the art perception of some users. Paradoxically, in this case it is not so much the museum, but the users, who worry about misuse and vandalism towards the artworks’ integrity when they are shared openly with the public. As such, the Metro project is a learning process for SMK where we reap new knowledge about how the public may wish to share and reuse digitized cultural heritage, and how they create new value for themselves and each other in the process. Opening up our digitized collections is all about letting go of the monopoly to define what art is and can be used for.

Here and here, more photos can be found of the two metro fence revamps we have contributed to.

Our initiatives with open images are inspired by the ideas behind Shelley Bernstein’s crowd-curated exhibitions at Brooklyn Museum, and by design principles in Nina Simon’s book The Participatory Museum (2010), among others.