The Other Lives of Adam and Eve

Sarah Toulouse, Head of the Rare Books and Cultural Heritage Department at Bibliothèque de Rennes Métropole, explores the mystery behind a couple of strange and unexpected images found in a 15th-century book of hours.

Medieval books of hours are sometimes held in contempt by scholars. There are so many of them in our libraries and their images mostly so predictable, that one looking for some interesting illuminated images might easily pass them by. But to do so would be a big mistake, as inside each one of them there is always hiding something unexpected. In 2001, Rennes Library was lucky enough to purchase a wonderful book of hours, the Jean de Montauban hours, named by the Breton nobleman it was made for around 1430. It is heavily illuminated, containing more than 110 miniatures, together with full foliate borders on every page. But besides the richness of its decoration, what immediately struck me while turning the pages was the originality of some of the images. Identifying some of them was actually quite difficult, as the scenes depicted were uncommon. There were even a few which I didn’t recognize at all. I was particularly puzzled by this one, in one of the margins: 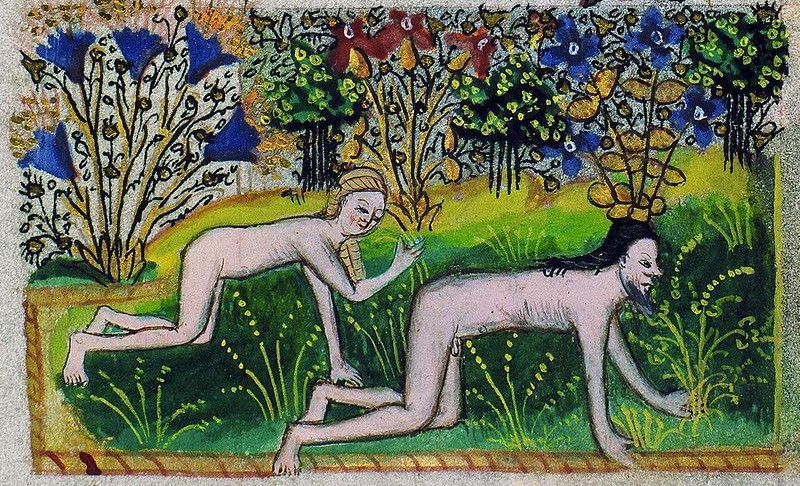 Who were those two naked people and what are they doing crawling on the grass like that? The text above happens to be the Lauds of the Virgin, which bears no relation to the image, as is often the case in books of hours. So no clue to the mystery lay in that direction.

The “who” question actually ended up being quite easy to solve, as this particular image belongs to a series of 10 marginal miniatures from folio 22 recto to folio 29 verso, clearly depicting scenes from Genesis, beginning with Adam and Eve in the Garden of Eden and finishing with Noah’s Ark:

Considering the place this strange image occupies in the series, the two naked people were evidently Adam and Eve, but nowhere in the biblical text can you find a story that could be illustrated in such a way.

The following scene of the series was even more puzzling: 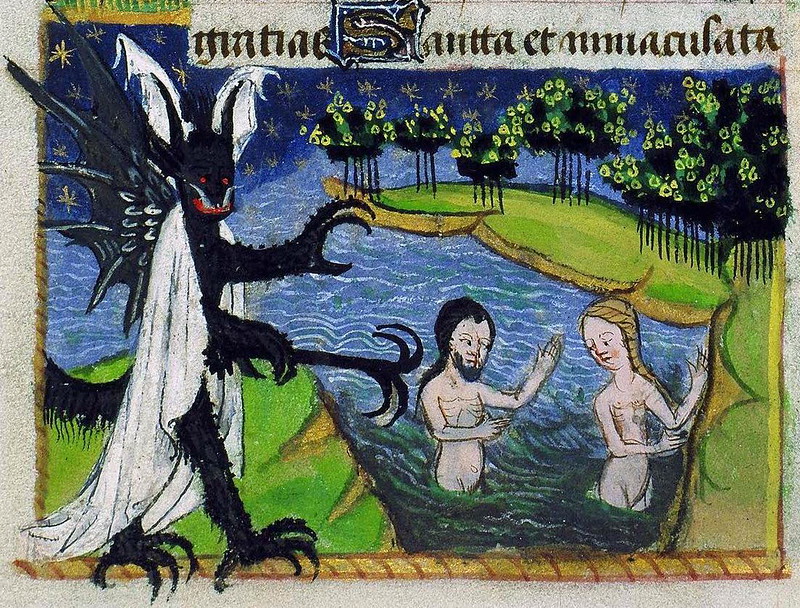 Here again, it is easy enough to identify the three protagonists as Adam, Eve and the Devil, but what are they doing in the water? Another oddity is that the typical scene of the Temptation, with the snake and the apple tree, is missing from the series, but the two scenes following this one depict Adam and Eve beclothed and working, i.e. outside Paradise. So could the image be a kind of peculiar representation of the Temptation?

I began looking for other similar images, or texts that could have inspired the illuminator, as it was highly unlikely that he would have completely invented the images. The answer finally came from an apocryphal text called Vita Adae et Evae (The Life of Adam and Eve). It relates how after the Angel expelled them from the Garden of Eden, Adam and Eve cried and moaned for 7 days. Beginning to feel hungry they ventured out in search of food, but they couldn’t decide whether to eat or not what they found. They were craving for the angelic fare they were used to in Paradise. To have God take them back to Eden, Adam suggested they should do a penance: he was to stay 40 days in the River Jordan, while Eve, more fragile, was to stay only 33 days in the River Tigris. And so they went, but after only 28 days, Satan, dressed up in disguise as an Angel, tempted Eve a second time, telling her that God had already granted her forgiveness. Again she yielded and left the water before the end of the penance, ruining all the efforts made thus far and the chance to ever make the return to Paradise.

These two puzzling scenes found in the Montauban hours are clearly inspired by the Vita Adae text, showing in the first scene Adam and Eve looking for their food, and in the second the penance in the rivers and the Devil coming to do his tempting work once again.
This text is in fact not uncommon and can be found in quite a large number of manuscripts, but its iconographic tradition is fairly sparse. Only three manuscripts containing this particular text are known to have images (Vienna, Österreichische Nationalbibliothek, Codex Vindob. 2980 / Paris, Bibliothèque nationale de France, Ms Fr. 1837 / Paris, Bibliothèque nationale de France, Arsenal Ms 5092). Beyond that, one can find a few chronicles showing one scene or the other (for example Berlin, Staatsbibliothek, Ms. germ. fol. 1416), but never a whole cycle. Furthermore, dating from the middle and end of the 15th century, all these other manuscripts come after the Montauban hours, made around 1430. So it might be that the Montauban hours include the very first images depicting these episodes of the Life of Adam and Eve. Just another piece of proof that every book of hours conceals a treasure for medieval images lovers!

Sarah Toulouse has been Head of the Rare Books and Cultural Heritage Department at Bibliothèque de Rennes Métropole since 1995.