Gallipoli: Through the Soldier’s Lens

To mark the 100 years since Australian and New Zealand Army Corps (ANZAC) fought the Gallipoli campaign of WW1, Alison Wishart, Senior Curator of Photographs at Australian War Memorial, explores the remarkable photographic record left by the soldiers. Made possible by the birth of Kodak’s portable camera, the photographs give a rare and intimate portrait of the soldier’s day-to-day life away from the heat of battle.

2015 marks the centenary of one of the most commemorated events in Australia’s military history. One hundred years ago, at dawn of 25th April, boatloads of Australians and New Zealanders quietly landed on Turkey’s Gallipoli Peninsula at a beach that became known as Anzac Cove.

Had Australia’s military commanders and elected leaders known how significant this event was to become in Australia’s history and the development of its national identity, they might have thought to send official photographers or war artists. But they didn’t. Instead, the photographic record of the nine month Gallipoli campaign relies primarily on the images taken by soldiers.

Fortunately, Kodak had released its ‘Vest Pocket’ camera in 1912, which made taking a camera to the front more feasible. Kodak encouraged enlistees to do this, marketing their new model as ‘the soldier’s Kodak’. Below is pictured the camera used by Sergeant P E Virgoe at Gallipoli from May-October 1915. 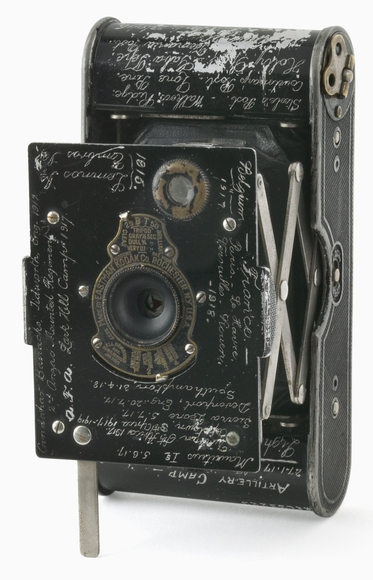 Officially, soldiers were not allowed to take a camera to the front. This was stipulated by Britain’s Secretary of State for the War, Lord Kitchener, after the bloody allied defeats of 1914 made it clear that manipulation of the public record of the war would be necessary to maintain enthusiasm for it. However, while the ruling was strictly enforced on the Western Front, it was barely given a cursory nod at Gallipoli. This allowed amateur and semi-professional photographer-soldiers to practice their focusing and framing skills in between their duties.

Approximately half of the Australians who fought at Gallipoli – nearly 25,000 recruits – left for their great overseas ‘adventure’ with a compact camera in their kit. Many of the nurses tending the wounded on the nearby Greek Island of Lemnos also carried a camera. 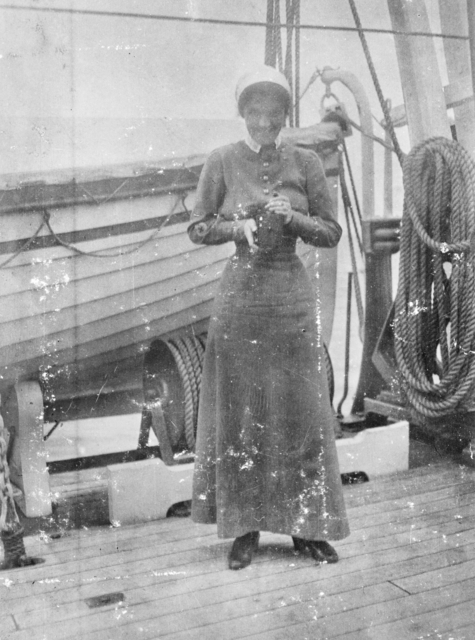 Little did they know that by creating their own visual diary, they would also be contributing to Australia’s only photographic record of the Dardanelles campaign. Of the 6,332 Gallipoli images from 1915 in the Australian War Memorial’s collection, soldiers took about 60 per cent. After the war, soldiers or their families donated their photographs to the Memorial, often in the form of personal albums or loose prints.

As ‘soldier photographers’, when they opened the shutter, they had a completely different purpose in mind from creating an official record of the war. This gives their photographs a raw, unmediated honesty. 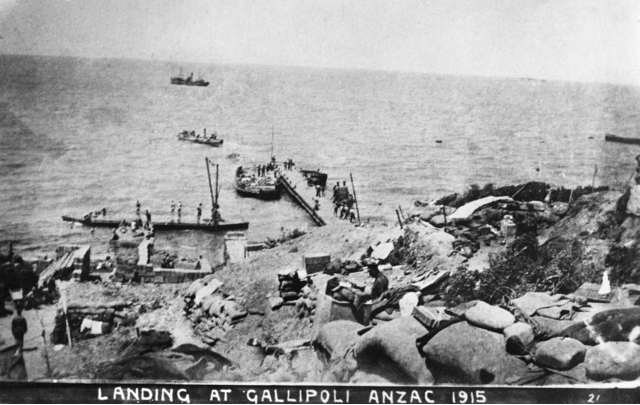 The men documented their daily life which was often boring and monotonous. In between battles, there were long stretches of ‘fatigues’ such as digging trenches and dugouts, carrying water up from the beaches or wells and going on sentry duty. As soldiers, they were not in a position to photograph their fighting, so they took snaps of their daily life instead. What the photographs lack in composition, they make up for in their poignant and candid simplicity. 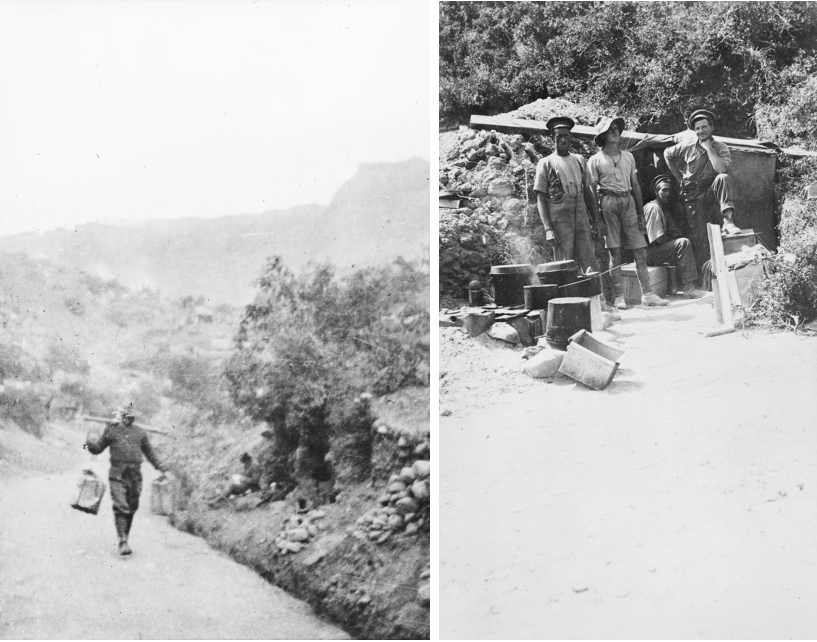 The photographs complement the soldiers’ written records. Sapper Victor Willey, a 22 year old from Victoria (service no. 134) wrote about his awful rations in a letter to his parents dated 7 September 1915:

We are fed up with this life, and the strain upon our constitution is terrible. In fact, some of us who have been in the trenches since 25th April and are now as weak as cats and no wonder! [. . .] in the morning we get a piece of bacon about six inches long [. . .] (but it is nearly all fat) and about a pint of tea with hard biscuits. On rare occasions we also get a loaf of bread. For dinner [lunch], we have three courses – water, tea and sugar (lovely). For tea, we have bully-beef stew (done to perfection). This happens every day, barring the bread – but at times the bread is forgotten altogether. 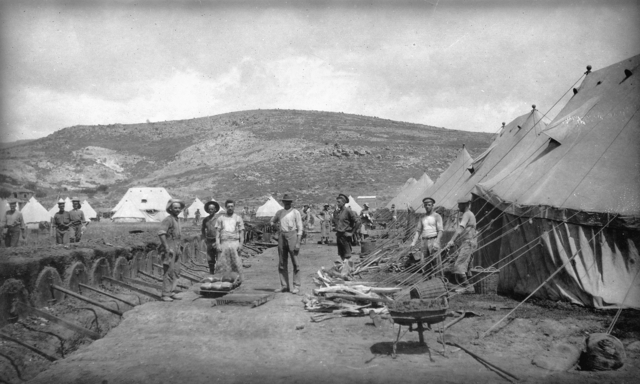 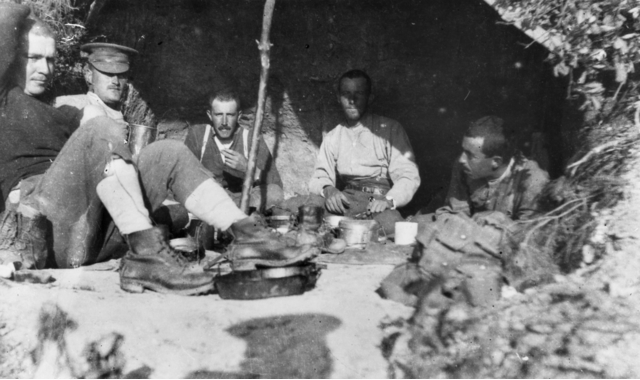 Staff Sergeant Hector Dinning of the Australian Army Service Corps wrote in his 1918 memoir:
It’s the monotony that kills; not hard work, nor hard fare. We have now been disembarked on the Peninsula rather longer than three months. But there has been little change in our way of living. Every day there is the same work on the same beach, shelled by the same guns, manned by the same Turks…

Colonel Charles Snodgrass Ryan, a surgeon with the Australian Army Medical Services, took a remarkable collection of over 180 photographs at Gallipoli and Egypt in 1915. His images, taken with a stereo camera, also depict daily life at Gallipoli, but are composed with a practised eye.

Officers and soldiers conferring in a trench reinforced with sandbags on one of the ridges at Gallipoli (1915) / P02648.008 – Source.

Corporal Albert Savage was stationed in the x-ray ‘department’ of the 3rd Australian General Hospital on Lemnos Island, 96km from Anzac Cove and the destination for casualties evacuated from Gallipoli. The Memorial holds over 300 photographs taken by him on Lemnos which provide a valuable insight into the workings of a field hospital on an arid island. 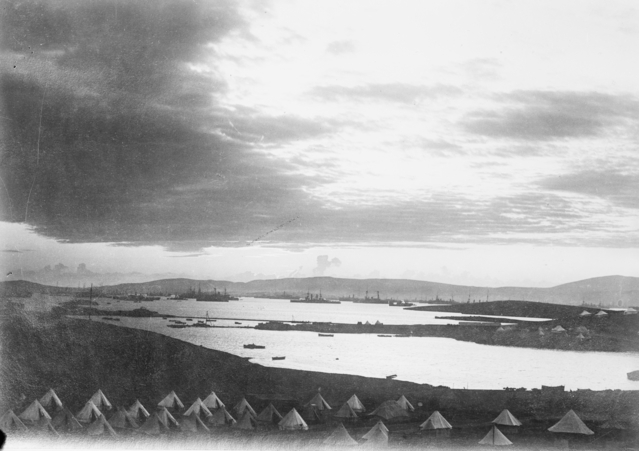 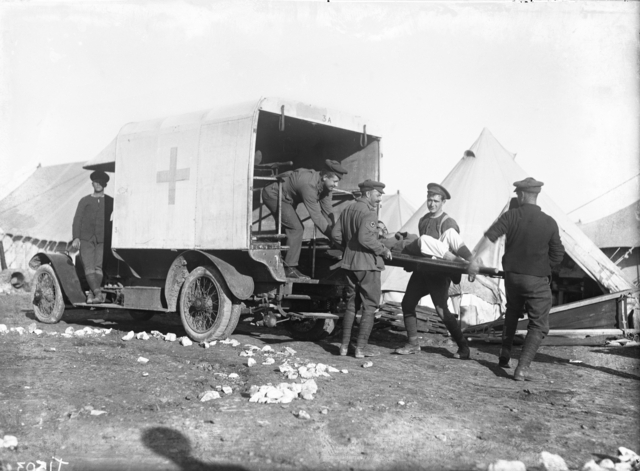 Evacuation of patients from No. 3 Australian General Hospital (3AGH) by ambulance to the wharf for ship transport to Egypt (1916) / J01503 – Source.

Padre Walter Dexter also had a camera at Gallipoli. As an Australian army chaplain who officiated at burial services he had to come to terms with death, and some of his photographs depict this. He also photographed soldiers at the latrines. These sort of candid images would never be within the remit of official photographers. 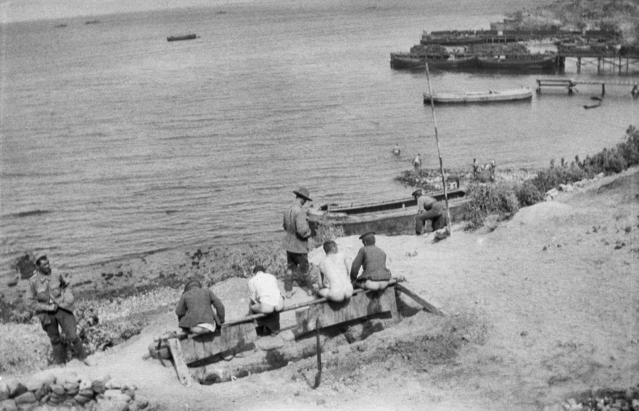 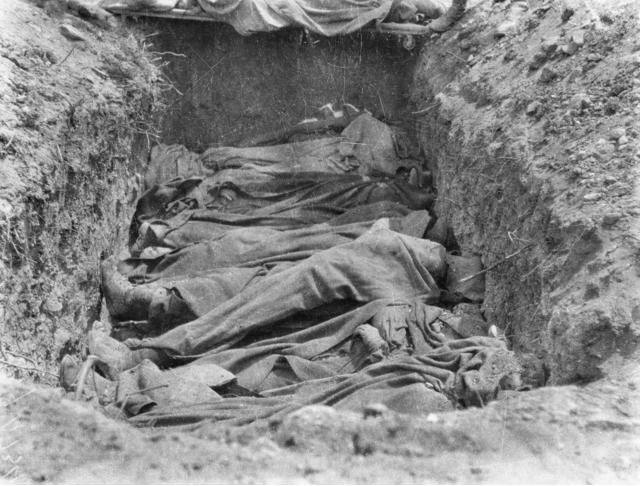 Bodies of dead soldiers lying in a row in a trench, having been covered with blankets or other items as shrouds (1915) / J04734 – Source.

One of Dexter’s photographs was acquired by Colarts Studio in Sydney and colourised and popularised by them. 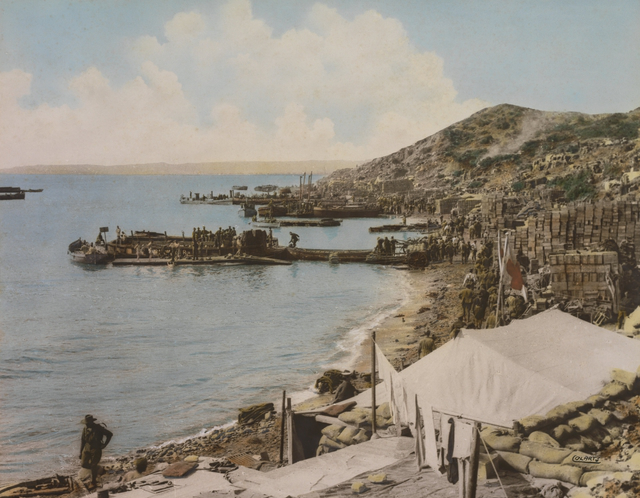 War correspondents Phillip Schuler and Charles Bean travelled with their cameras as well as their typewriters. Before embarking for Gallipoli, they photographed each other on the same pyramid in Egypt. 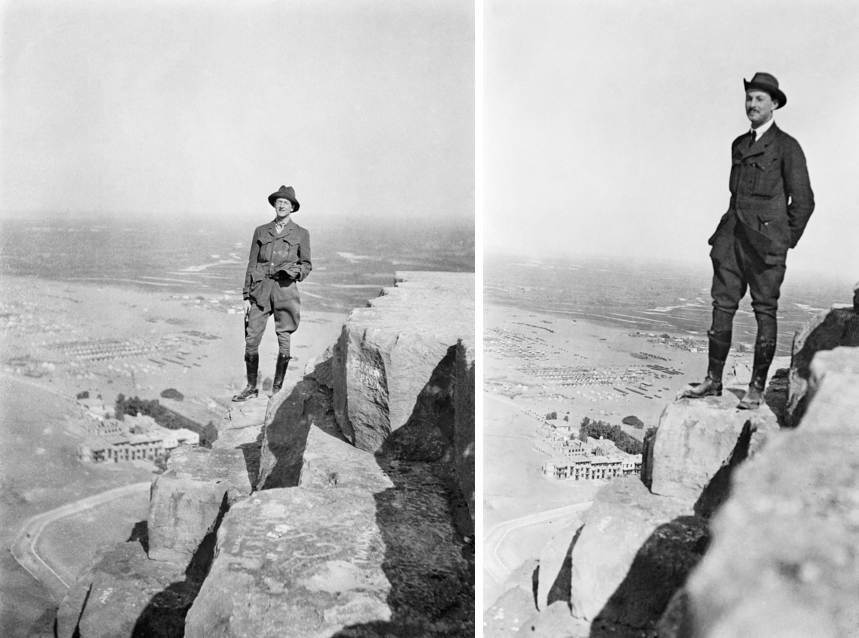 The Memorial holds more than 2000 of Schuler’s evocative photographs from Gallipoli and the western front (where he was killed in June 1917) including a much reproduced image after the battle of Lone Pine. 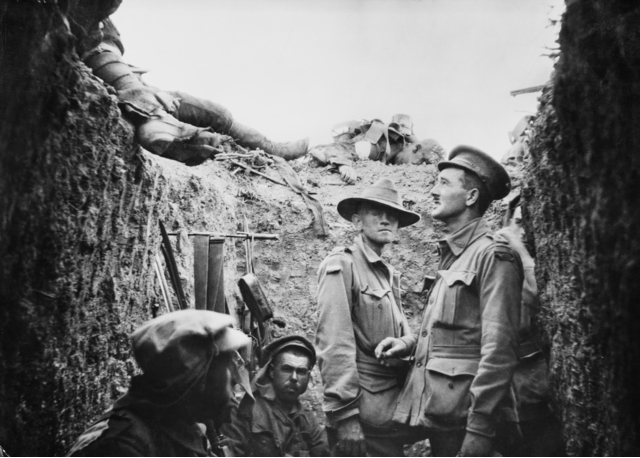 Charles Bean, Australia’s only official war correspondent at Gallipoli, felt that photographs should tell the “plain, simple truth”. He disagreed vehemently with the practice of Ernest Brooks, who staged photographs for dramatic effect, such as the photograph seen below. Brooks was appointed by the British Admiralty to photograph British and Australian troops at Gallipoli. 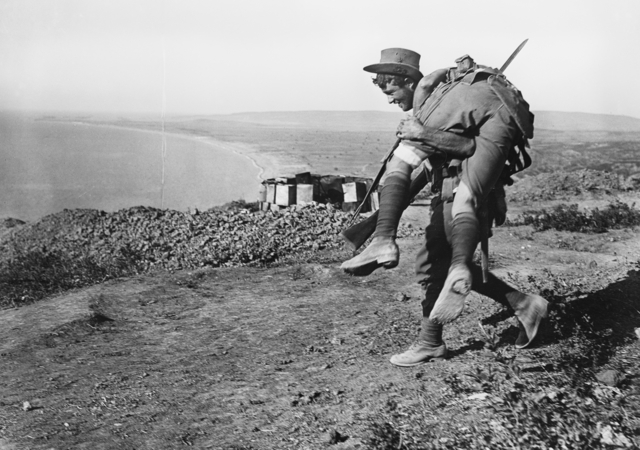 A staged photograph: The original Admiralty caption to this photograph reads: “An Australian bringing in a wounded comrade to hospital. Notwithstanding the unhappy situation, they joked as they made their way down from the front.” (1915) / G00599 – Source.

Charles Bean went on to help establish the Australian War Records Section in 1917 and write the Official History of the Australian Imperial Forces in the First World War. His photographs, such as that of an outdoor communion service, helped him recall the events of the Great War. 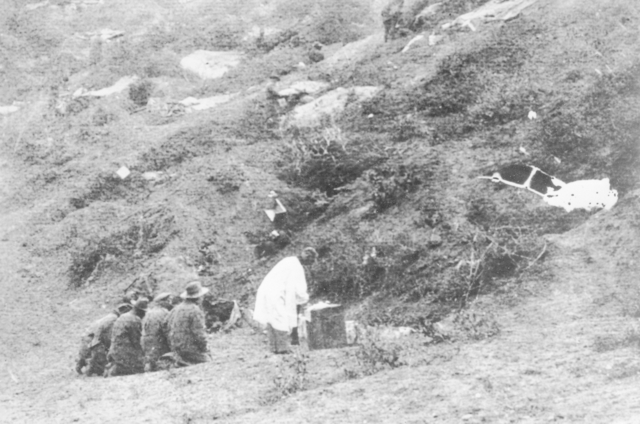 For the 25,000+ Australian soldiers who took cameras to Gallipoli, their photographs also served as memory triggers. When they returned from the war, the images reminded them that amidst the monotony of trench life – the flies, heat, dust, stench and thirst of the summer stalemate – they found people and events worth photographing. A century on, we are grateful to these soldier photographers for giving us a glimpse into their life at Gallipoli. Devoid of hubris, but often full of humour and pathos, these photographs provide a unique record of life at the front line. As Australians and New Zealanders around the world gather at dawn this Anzac Day, I hope we will remember not just the soldiers who landed on the beaches, but also the remarkable photographic record they created.

Alison Wishart has worked as a curator and/or collection manager since 2003 at the Museum of Tropical Queensland in Townsville and the State Library of Queensland (Brisbane) before moving to Canberra in 2008 to work at the National Museum of Australia and now the Australian War Memorial where she holds the position of Senior Curator of Photographs. She has a BA (Hons) from the University of Queensland and a Masters in Museum Studies and Cultural Heritage. Alison is currently researching the psychological, social and physical impacts of food at Gallipoli and online memorialisation.

To learn more about Australian War Memorial visit their website and browse their digital collection.