Sheila Rabun, Digital Project Manager at the University of Oregon Libraries’ Digital Scholarship Center, gives a tour of the rich and varied history of news media in Oregon. 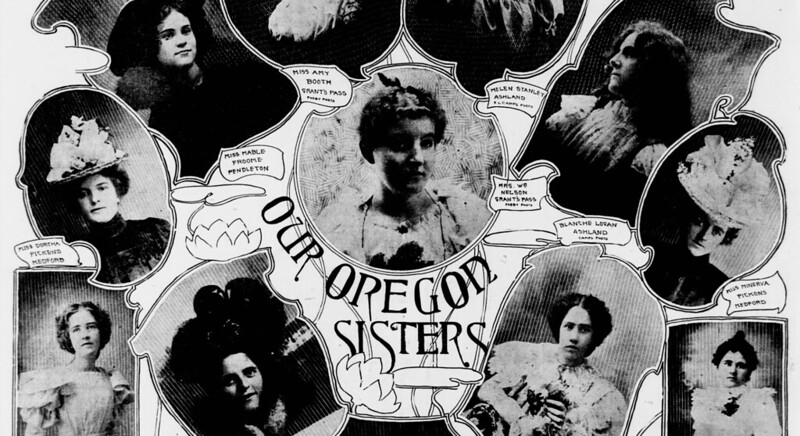 The Historic Oregon Newspapers online collection contains over 130 newspaper titles from across the state, primarily published before 1923, an era in which Anglo American men dominated the newspaper industry. Racism, sexism, and other modes of discrimination abound in historic newspapers, but hopefully we can learn from the errors and injustices of the past. Most mention of Native Americans, Chinese immigrants, and other cultural groups in Oregon’s early newspapers came from an Anglo viewpoint, and it can be challenging to find other voices in these “first drafts of history.” 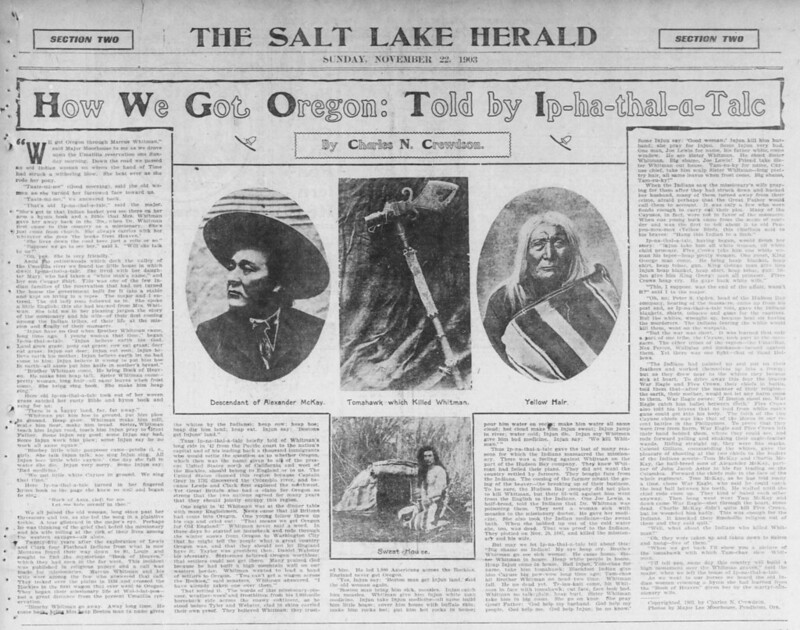 A unique article found in a Utah newspaper claims to be written from the perspective of an Oregon woman from the Umatilla tribe (see the ODNP Blog for more info). The Salt Lake Herald. (Salt Lake City, Utah) November 22, 1903, Last Edition, Section Two, Image 9 – Source.

Every detailed inch of a newspaper page—the size, font, layout, rhetoric and writing style, mistakes and typos, advertisements and images—can reveal a plethora of information about the culture in which the newspaper was produced. By providing free, online access to these public domain materials, we are not only enabling a renewed awareness and connection to our collective past, we are also shaping the future of digital preservation and accessibility of public domain primary source documents. While all of the titles in the Historic Oregon Newspapers online collection document Oregon’s cultural heritage, the unique titles highlighted below have played especially crucial roles in shaping Oregon’s history. How much has changed, and what has stayed the same? How has our history shaped the present, and how will we continue to shape the future?

The oldest title in the Historic Oregon Newspapers database is the Oregon Spectator (1846–1855), first published on February 5, 1846 in Oregon City, thirteen years before Oregon became a state. The first newspaper to be published on the west coast (California’s first paper came seven months later; Washington had no newspaper until 1852), the Spectator was initiated by the newly formed Oregon Printing Association, consisting of several prominent citizens of Oregon Territory, including Francis W. Pettygrove, who gave the city of Portland its name, William G. T’Vault, the Spectator’s first editor, and Oregon’s first territorial governor, George Abernethy, whose influence dominated the publication. The paper’s motto, “Westward the Star of Empire takes its way,” accurately captured the overall tone of the publication. 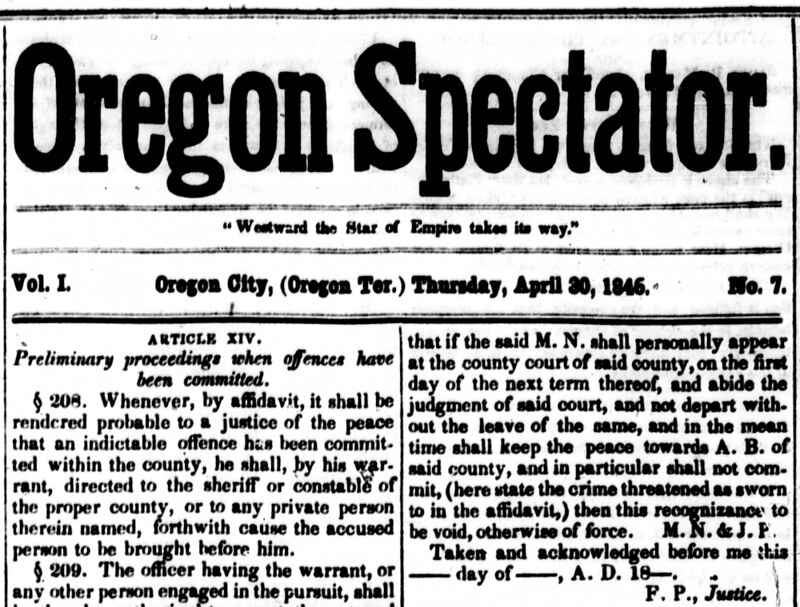 The Spectator’s voice fell short of unbiased reporting, and one of the paper’s editors, George L. Curry, was fired early on for refusing to cater to Governor Abernathy’s political interests. As a direct protest to the Spectator, Curry started the Oregon Free Press in 1848 with the motto: “Here shall the Press the people’s rights maintain, un-awed by influence, and un-bribed by gain.” The Free Press was only published for six months due to the outflow of Oregon readers to the gold mines of California, but Curry went on to become Secretary of the Interior for Oregon Territory as well as one of the youngest governors of Oregon, in 1854. The Spectator and the Free Press laid the foundations for opposition in Oregon’s print journalism between dominant and marginal political and social perspectives of the times. 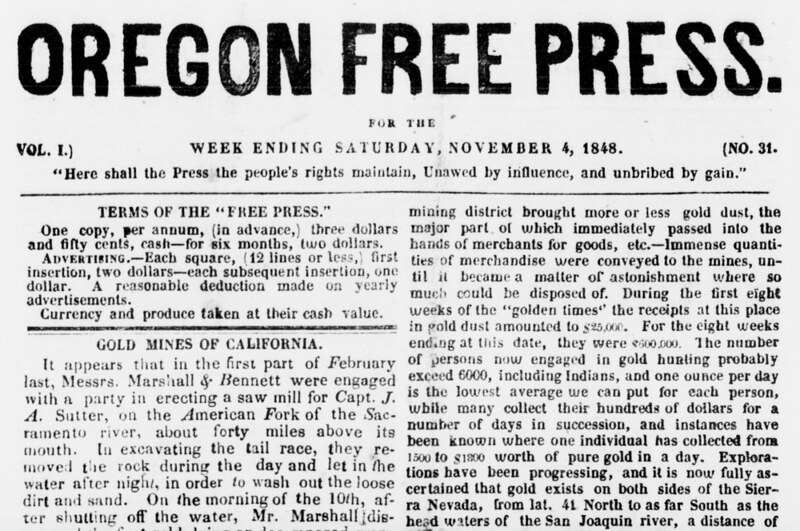 The Oregon Free Press was only published for 6 months, due to the California gold rush. Oregon free press. (Oregon City, Or.) November 04, 1848, Image 1 – Source.

The growth of Oregon’s economy, transportation, and natural resource industries can be traced through the pages of titles from various regions of the state, and researchers can witness first-hand the development of forestry, fishing practices, railroads, and Oregon’s mining boom. Salem’s Willamette Farmer (1869–1887) was Oregon’s first paper to focus on environmental, economic, and political issues related to agriculture, and was one of the first publications to point out the trend toward decline in wild salmon populations. 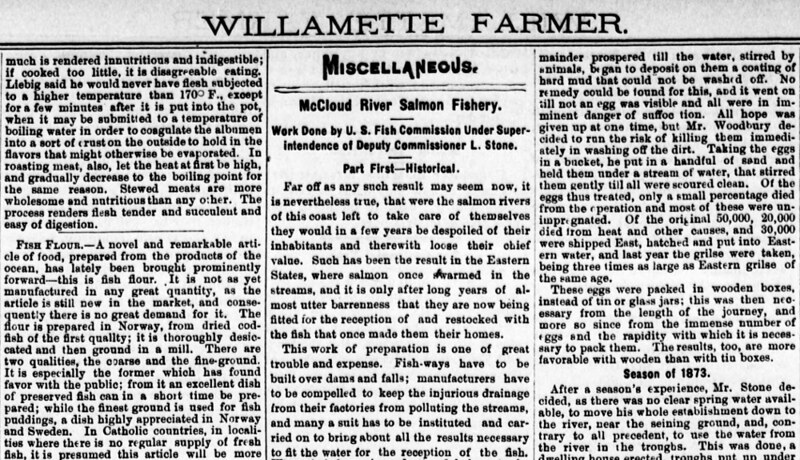 This article from the Willamette Farmer explains the measures that humans must take to ensure the survival of wild salmon.
Willamette farmer. (Salem, Or.) January 07, 1876, Image 3 – Source.

The issue of women’s voting rights is prevalent in almost all of Oregon’s early newspapers, but The New Northwest is most prominent in leadership and advocating for equal suffrage, workers’ rights, racial equality, immigration, and human rights, in the face of fierce opposition from the mainstream press. The paper was published in Portland by Abigail Scott Duniway, a women’s rights and human rights advocate who came to Oregon via the Oregon Trail. With the help of Duniway, women in Oregon gained the right to vote in 1912, almost a decade before the United States government passed the 19th amendment. Now remembered as “Oregon’s Mother of Equal Suffrage,” Duniway finally witnessed the passage of the Oregon Proclamation of Women’s Suffrage, which she authored and signed, at the age of 78. 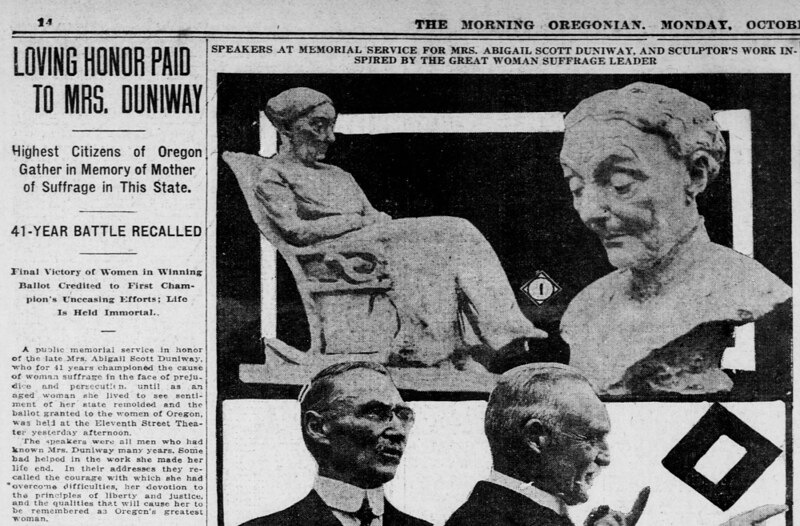 The West Shore, which later became The Illustrated West Shore, was Oregon’s first illustrated journal, ahead of its time in terms of scope, quality and illustrative nature. Although not technically a newspaper, The West Shore was instrumental in drawing attention to the natural wonders and resources of the Pacific Northwest with extensive illustrations and regional literature. The West Shore’s creator, Leopold Samuel, was a German-Jewish immigrant who moved to Portland around 1871 and began printing “alphabetical and illustrated Portland city directories” with countless illustrations, rare for the time period and considered a “regional novelty” due to the technical and costly efforts to print them. Although somewhat short lived, The West Shore provided thousands of people with access to art, literature, poetry and science; an incredible victory in the development of the Pacific Northwest. 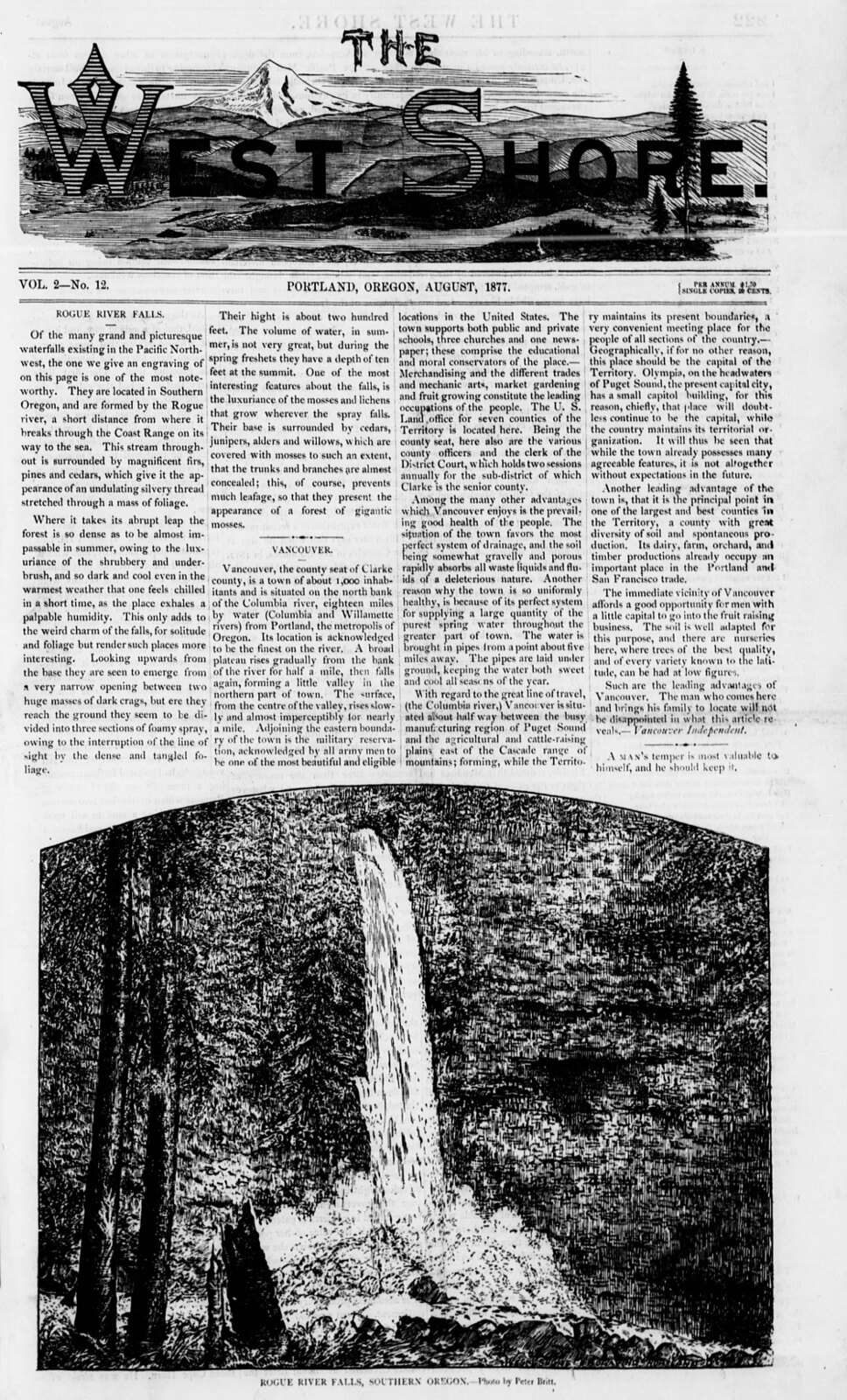 The West Shore drew interest to the Pacific Northwest with intriguing and detailed illustrations.
The West Shore. (Portland, Or.) August 01, 1877, Image 1 – Source.

Oregon’s first African American newspapers are also part of the Historic Oregon Newspapers Online collection: The New Age (1896–1905) and subsequently the Portland New Age (1905–1907), published in Portland by Adolphus D. Griffin, offer a unique perspective on Oregon’s cultural history, given that African Americans were legally excluded from the state from 1857–1926. As a leading advocate for African American equality in the Pacific Northwest, Griffin was twice elected as a Republican delegate to the state convention, and his newspaper kept readers aware of the many issues facing America’s black population. The Portland New Age included national news items such as an annual announcement from Booker T. Washington for the National Negro Business League (1906), as well as Griffin’s own freely expressed opinions on African American involvement in business, politics, and academia. Readership extended beyond the greater African American community to include Anglo readers as well. 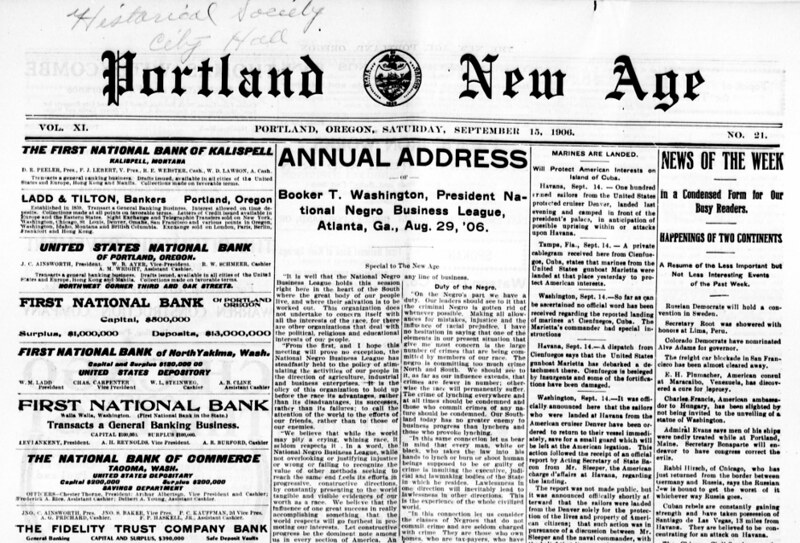 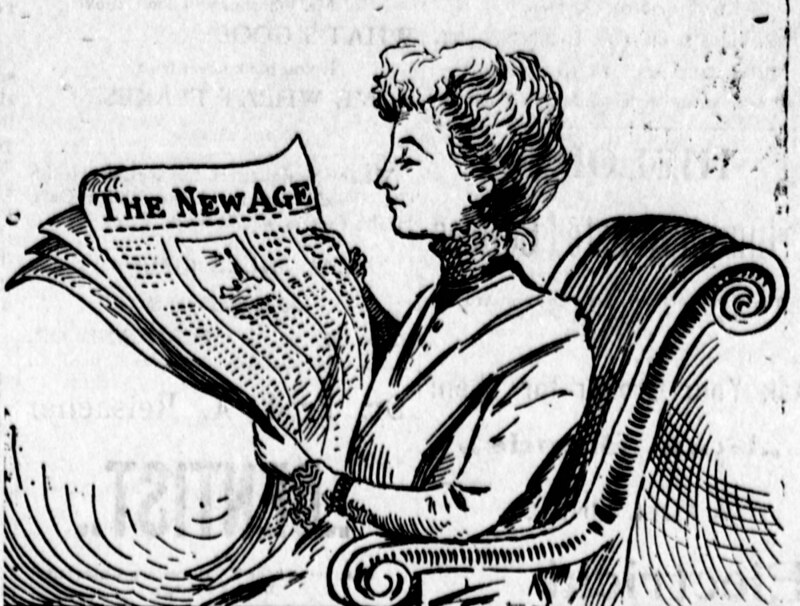 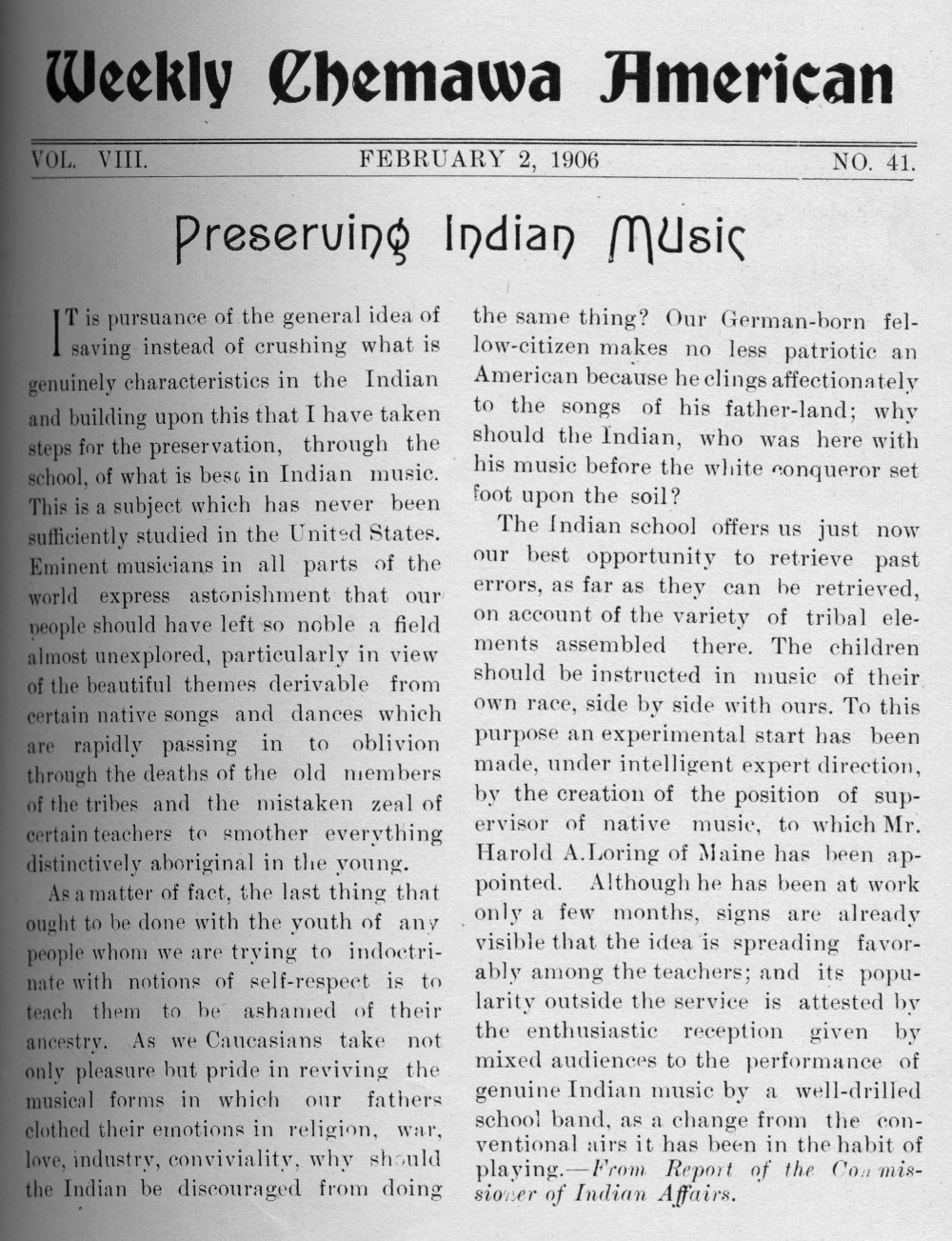 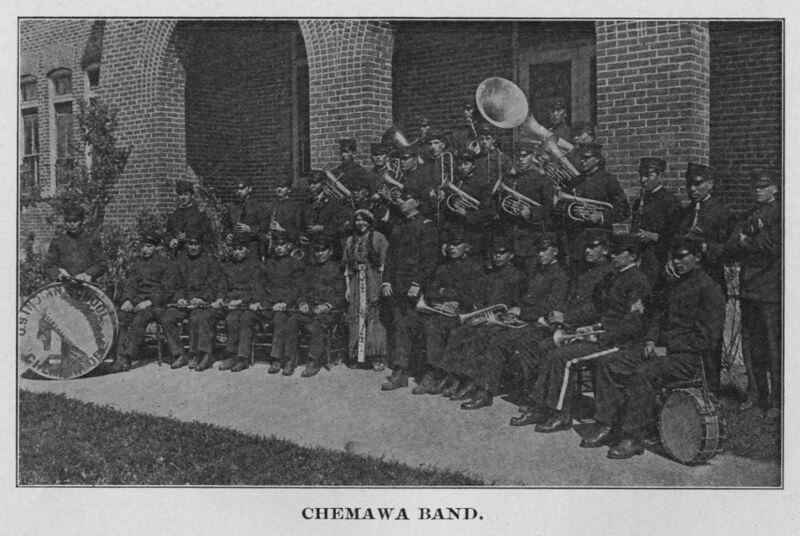 Toveritar (The Woman Comrade), a Finnish weekly paper for socialist women, represents
the voice of both the early Finnish immigrant population in the Pacific Northwest and the Socialist Party movement in Oregon. Based in Astoria, Oregon, all of the paper’s editors were Finnish women, and it was one of the only Finnish language newspapers for socialist women at the time. Toveritar includes important information on the youth socialist movement and working women’s movement and covers the controversial time period when the Finnish Socialist Federation (SSJ) split from the Socialist Party of America and later associated with the Workers Party of America. 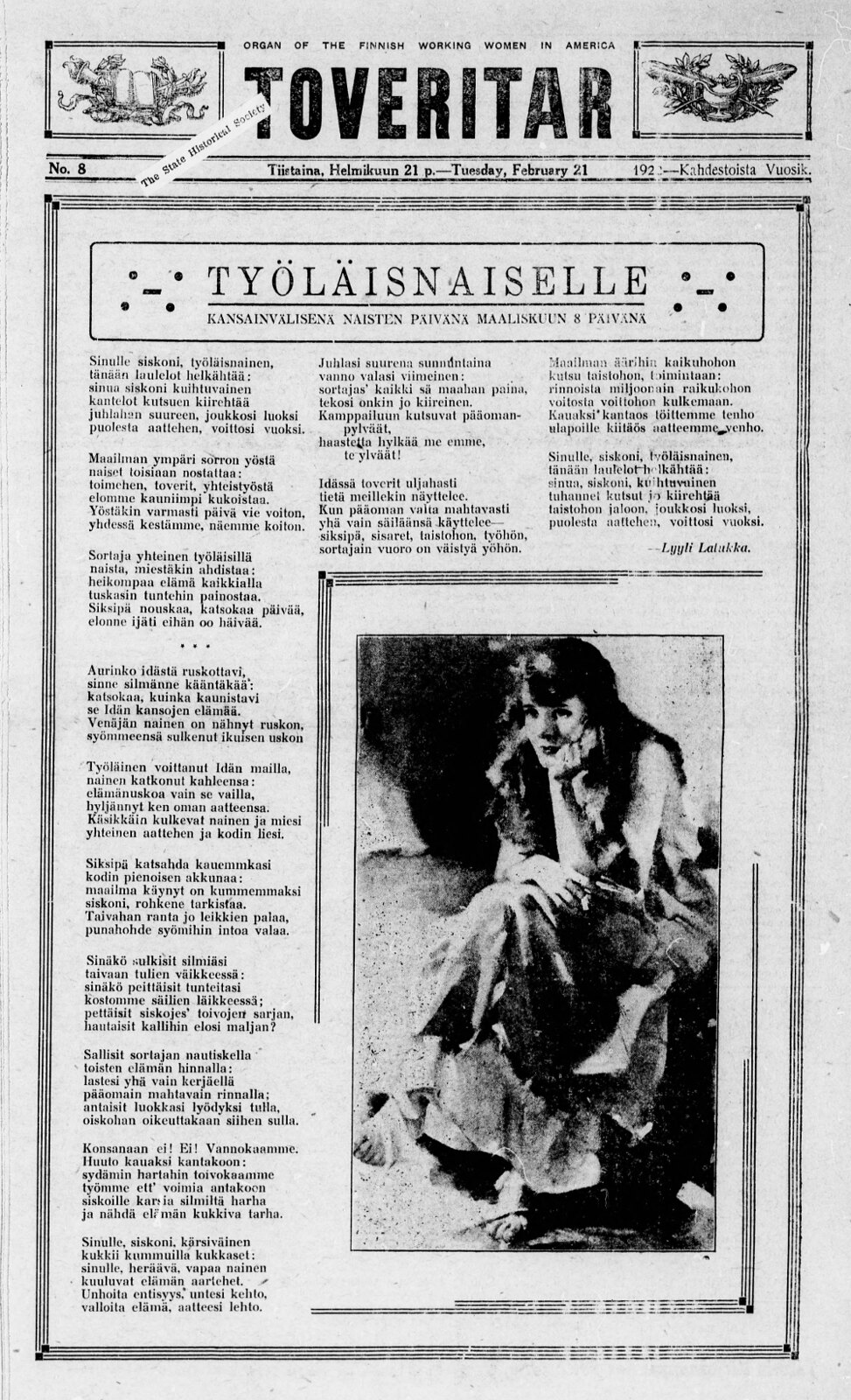 From freedom of speech and political and social equality, to the effects of human activity on the natural environment, the stories of history remain with us today, more broadly accessible than ever before. The titles and clippings highlighted here are just the beginning. A treasure trove of historic, public domain newspaper content is available online, just waiting to be discovered!

Sheila Rabun is the Digital Project Manager at the University of Oregon (UO) Libraries’ Digital Scholarship Center (DSC), currently serving as the Interim Director of the DSC. Her work in the DSC involves collaborations with faculty and students from various departments across campus to create interactive websites and digital projects related to the Libraries’ digital collections, in addition to managing the UO Libraries’ digital collections at Oregon Digital and the Oregon Digital Newspaper Program.

The University of Oregon (UO) Libraries’ Oregon Digital Newspaper Program (ODNP) has taken historical research to the next level by providing free, online access to public domain, keyword searchable, Oregon newspapers, available to a worldwide audience at Historic Oregon Newspapers. Founded in 2009, the ODNP has remained in operation with grant funding from the Library Services and Technology Act, the Oregon Cultural Trust, the Oregon Newspaper Publishers Association, partnerships with local public libraries and heritage organizations, and private donations. The ODNP is also part of the National Endowment for the Humanities’ National Digital Newspaper Program (NDNP), in partnership with the Library of Congress, a collaborative effort to build a free, searchable, digital repository of historic newspaper content from across the United States, starting with publications from 1836–1922. A portion of the historic Oregon newspaper titles digitized to date are currently available on the Library of Congress’ Chronicling America website, along with public domain titles from several other states.