The Legend of the Divine Farmer

Gillian Daniel, Graduate Trainee at the Wellcome Trust, explores the story of Shen Nong, born of a princess and heavenly dragon, and teacher to the ancient Chinese of agriculture and herbal medicine. 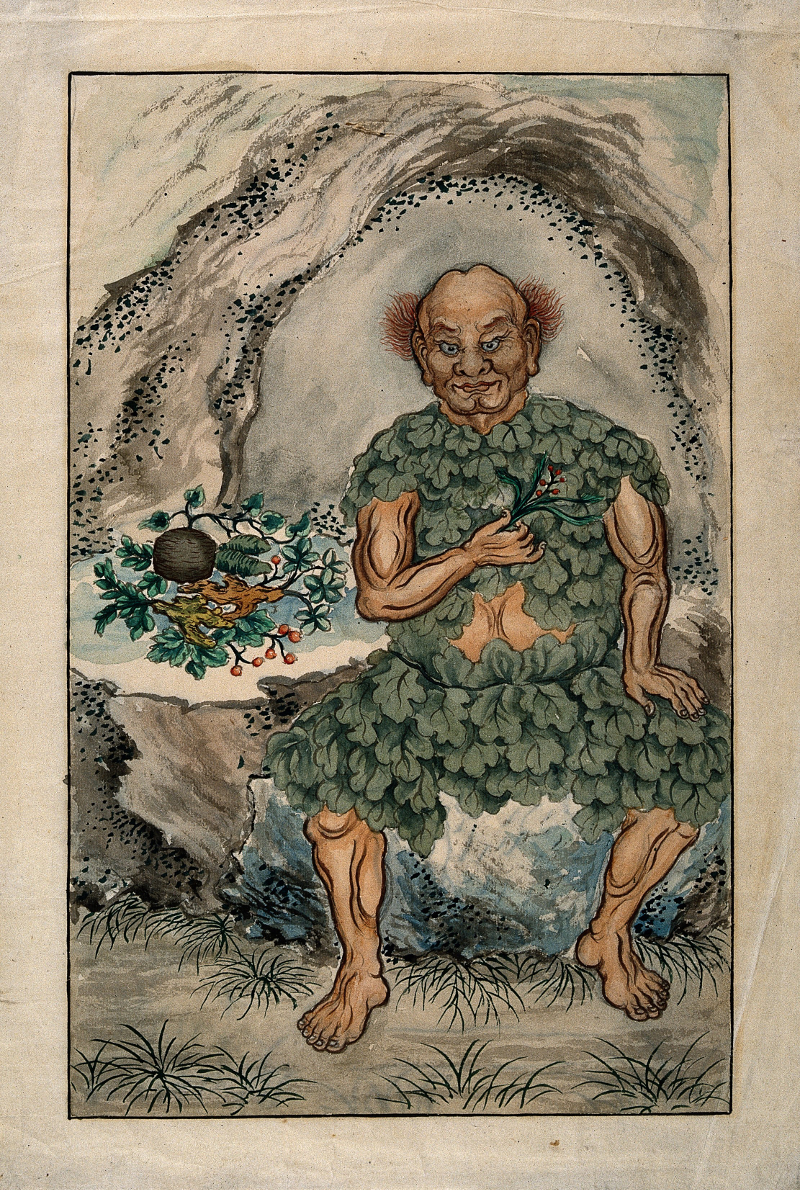 Watercolour: Shen Nung seated at the mouth of a cave, dressed in traditional garb made from leaves, holding a branch with leaves and berries in his right hand; anon., {Chinese artist}, 1920. Wellcome Images reference no. V0018486 – Source.

This ca. 1920 watercolour is a copy of an ancient original and can be found in the Library’s Art Collection, along with other visual material featuring the Shen Nong.

Legend has it that Shen Nong (神农), or ‘Divine Farmer’, was one of the Three Sovereigns, a group of mythological rulers and deities from ancient China circa 2852 to 2070 BC who established the Chinese life-arts. Said to have been born the son of a princess and a heavenly dragon, Shen Nong is believed to have taught the ancient Chinese their practices of agriculture, as well as the use of herbal drugs, which became the foundation of traditional Chinese medicine.

The earliest written record connecting Shen Nong to the practice of Chinese herbal medicine is found in the Huai Nan Zi (淮南子), or ‘The Masters of Huainan’, the Chinese philosophical classic from the Han dynasty in 122BCE. The text claims that Shen Nong transformed the ancient people’s diet from one of meat, wild fruits and clams by teaching them how to sow and harvest grains and vegetables. He is also said to have discovered and classified some 365 species of herbs and medicinal plants and is often referred to as the ‘God of Chinese herbal medicine’.

Tea is allegedly one of his great discoveries, as it proved to be the antidote for almost 70 varieties of poisons. Shen Nong discovered tea by accident when the tea leaves from twigs he was using for a fire rose up on a column of hot air and landed in the water he was trying to boil. Being a keen herbalist, he tasted the resulting brew and this became the origins of tea. Shen Nong tasted hundreds of herbs in order to determine their medicinal value.

The story of Shen Nong has been passed down orally for centuries and has been differently embellished throughout histories. Some versions even claim Shen Nong had a see-through stomach that allowed him to see the effects of various herbs on his internal organs. However, by all accounts, because of his tireless efforts, countless herbs are now commonly used in traditional Chinese medicine and knowledge about herbal medicine has been handed down for centuries.

Shen Nong is thought to have charted his long study of herbs in the text Shen Nong Ben Cao Jing (神农本草经), which was published in English as The Divine Farmer’s Materia Medica, but can be directly translated to mean ‘The Herbal Classic of the Divine Farmer’. Of the ten preeminent pre-modern classics of Chinese medicine, the Shen Nong Ben Cao Jing is one of the two most important, as it is the locus classicus of Chinese herbal medicine (the second is Huang Di Nei Jing (黄帝内经), published in English as The Medical Classic of the Yellow Emperor, which is the authoritative text for Chinese medical theory, particularly acupuncture and moxibustion). Because of Shen Nong’s efforts, numerous herbs became routinely used for health care.

Gillian Daniel is a Graduate Trainee at the Wellcome Trust.

This is a post originally published on the Wellcome Library Blog. We highly recommend paying them a little visit for more context and background stories on their wonderful collection.